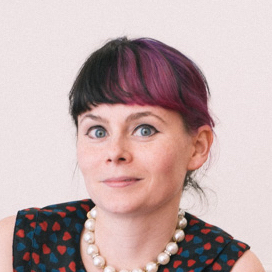 I love to take fantastic dreams and make them into a functioning designs!

DESIGNED TO MAKE A DIFFERENCE: 3 STORIES OF PIXELS, PERSONALITIES, AND ROCK & ROLL

Visualizing an idea can be the most important step to making something real. Designer and singer, Rebecca Garza-Bortman shares her experiences of how small designs can create huge changes—from how a 16x16 pixel plot of internet real estate changed an international brand, to how an uncoded webpage convinced celebrities to teach classes, to how her version of matrimonial bliss came from creating a rock opera. Rebecca is thrilled to kick off Pixel Up by sharing the design stories that have shaped her career to date!

Rebecca Garza-Bortman is a designer and singer, living in partly-sunny San Francisco. She is the first employee and designer behind the education platform, MasterClass. Launching in May 2015, masterclass.com is quickly becoming the premiere online destination to learn from the world’s greatest talents—learn tennis from Serena Williams, acting from Kevin Spacey and Dustin Hoffman, and performance from Usher and Christina Aguilera.

Prior to MasterClass, Rebecca spent three years at YouTube, where she led YouTube’s first visual redesign in its (then) 7-year history. She started her career as a consultant at Cooper and Mule Design, designing interfaces for everything from medical devices to political publications as well as the design handbook, About Face 3. She spent 5 years as the art director of The Disposable Film Festival, an international festival celebrating the cinema made possible by low-cost technology.

Musically, she was the war-painted frontwoman in the rock band, Happy Fangs. Last year, she wrote and performed an all-original rock opera wedding with her husband, Scissors for Lefty’s Bryan Garza. The couple now makes music together as Love, Jerks. She’s a proud Pittsburgher and graduate of Carnegie Mellon University, School of Design with a minor in creative writing.