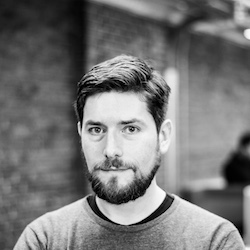 KEYNOTE — INTERFACE DESIGN: THEN, NOW, AND NEXT

Somewhere around the age of twelve I decided to be a graphic designer. Maybe one day I’d get to design an airline identity, and see my work adorning the tail fin of a 747. It never occurred to me back then that I might design interfaces, even though I knew someone had designed the software I used every day. Even at art school, interface design just didn’t seem like a career — the internet was a novelty, and my phone was pretty much just a phone.

This is a look at how our job as interface designers has rapidly evolved over the last three decades. Starting with early user interface design, through to where it is today, and ultimately trying to figure out where it might be tomorrow. Along the way I hope to share some stories, some of the things I’ve learned, and hopefully give some insight into how to be a more effective designer in our ever changing industry.

Martin has designed software you use every day, but he’s still always searching for elegant solutions to complex new problems. He currently leads design at Dropbox’s New York office.

During his time in California, Martin was a member of Apple’s renowned Human Interface Group, designing applications and new features for iOS, the software that powers the iPhone and iPad. While at Square he led the design of new mobile payments apps on multiple platforms. At the agency 80⁄20 he designed consumer operating systems, mobile applications, and desktop software for international clients including Nokia, Google, and Skype.

Originally from the UK, Martin has a keen eye for detail, and is drawn to finely crafted functional objects. He’s particularly fascinated by watches, and is a member of the Horological Society of New York, founded in 1866. He currently lives in Williamsburg, Brooklyn.