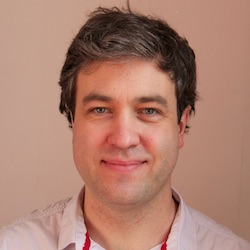 VR is a medium where the conventions, rules and possibilities are only just being discovered. For those interested in interaction design and UX, it’s an incredibly exciting time as new hardware, especially those with tracked controllers, allow for completely new interactions in 3d space. Pascal will review the current VR landscape, detail important considerations when designing for VR, outline emerging best practices and highlight areas still ripe for innovation.

Since early 2014 I have been building a wide variety of virtual reality experiences. These include a sky-diving ride for conferences, a trade-show stand for Siemens and lots of interface prototypes. I’m really excited by the possibilities offered by the new wave of VR devices, especially those with tracked hand controllers such as the HTC Vive and Oculus Touch.

In 2015 I was on the winning team in the Big Data VR challenge, organized by the Wellcome Trust and Epic Games, where we showed how VR can help scientific researchers make sense of huge datasets.

Most recently I’ve been developing the software for the pioneering Icaros gym equipment. The Icaros combines aspects of exercise and gaming through the use of a custom-built rig that allows you to fly through VR environments just by shifting your centre of mass.

Before all this, I was co-founder and technical director of Specialmoves, an award-winning high-end interactive production company formed in 2000. Over the years we worked for Rolex, MTV and many of the world’s best agencies including W+K, BBH and Fantasy Interactive. We gained a reputation for high-quality work and being able to deliver complex interactive projects that others simply couldn’t.